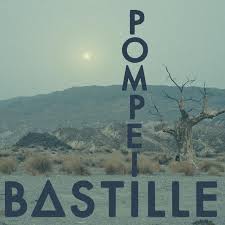 The London four piece band known as Bastille, consists of band members Dan Smith (vocals, keyboard, percussion), Kyle Simmons (keyboard, percussion, backing vocals), Will Farquarson (bass, keyboard, acoustic guitar, backing vocals), and Chris “Woody” Wood (drums, backing vocals). The band came together back in 2010, when Bastille first began as a solo project that Smith had originally created. Bastille is named after Bastille Day, the French celebration of July 14th, 1789; which is the anniversary of  the Bastille fortress prison being stormed and was seen as the uprising of a modern France. In 2011 they were signed to record label EMI and signed a contract with Virgin Records, soon after they dropped their debut single “Overjoyed” in April of 2012. In February 2013 their fourth single “Pompeii” was released and charted at number two in the United Kingdom and reached number one in Scotland.

The single is an upbeat song with a tribal kick to it with the “eeoeo eeoeo” chant going on in the background of the entire song. Smith’s voice carries you away with his smooth harmonics. The single is featured on both their debut full length album Bad Blood which released this past March in both the United Kingdom and the United States, and is also featured on their Haunt EP, that released in May only in the United States. Bad Blood has topped the UK charts since its release and is available for streaming on Spotify and iTunes.

Check out the music video for “Pompeii” here!