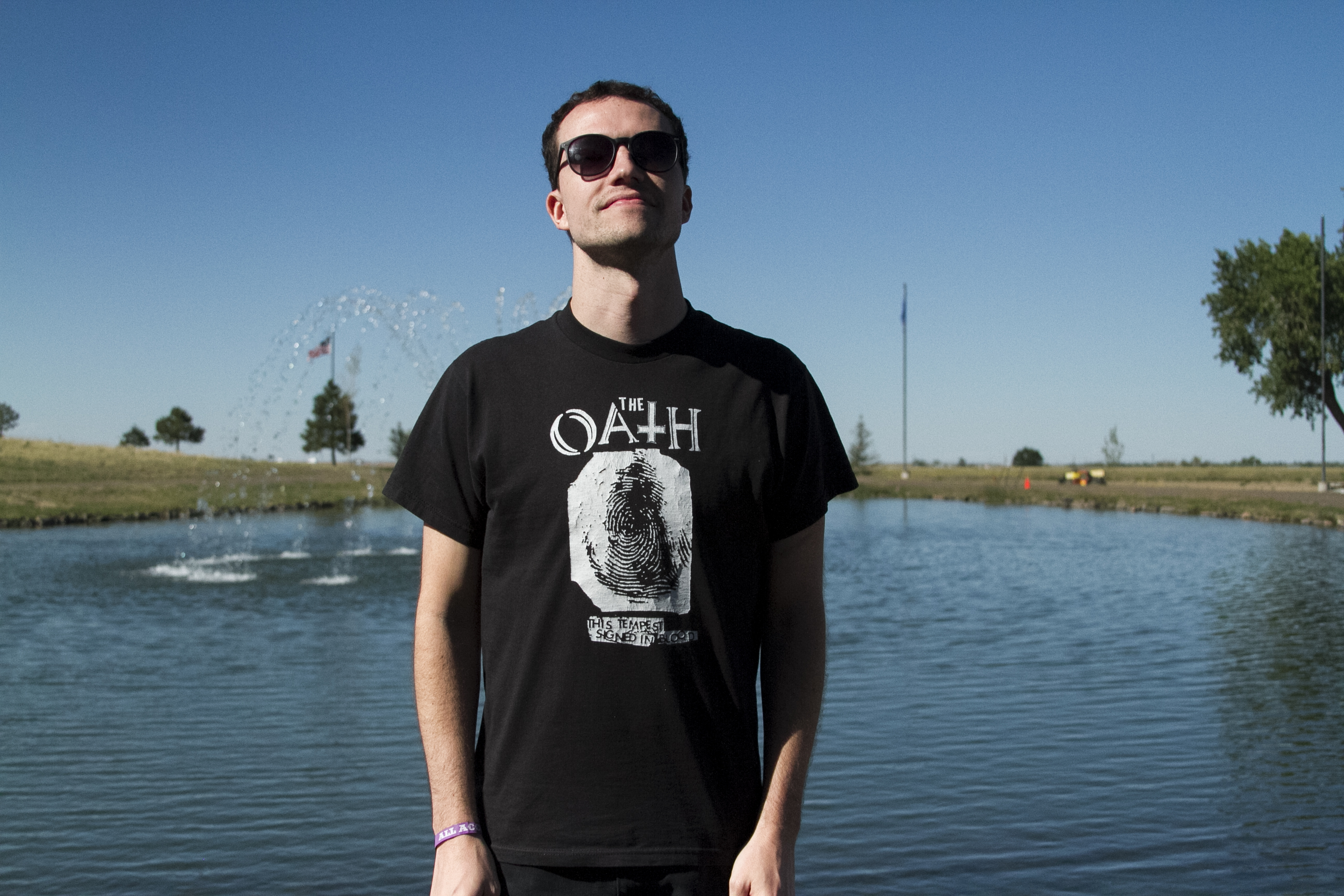 Los Angeles hardcore band Touche Amore are back with their new album “Is Survived By”. This past weekend, we sat down with frontman Jeremy Bolm after their set at Riot Fest Denver to talk about the new music, their crazy touring schedule and leaving your mark on the world.

What is the one act/band you are most excited to see play at Riot Fest?

The Replacements. I got to catch them in Chicago and it was awesome. I’m really excited to get to see them again. Also, we didn’t get the chance to see Brand New last time because they were playing at the exact same time, so I’m stoked to see them.

Touche Amore’s last album “Parting the Sea Between the Brightness and Me” received a lot of critical acclaim as one of the best albums of 2011 – did that put any pressure on when writing the new record “Is Survived by”?

Yea, you know, the third record is definitely the hardest record to write because you have a lot of people in your ear making you feel that pressure and you feel like there is an expectation put on you, but you try to not let that eat at you but its kind of hard not to. You are worried and you hope that people like because you can’t write the same record a third time. You have to branch out and do something a little different – you should be doing that anyway out of growing as a band. But yea, I think there is always going to be that nervousness but you just have to look past it. We ended up writing the record that we were meant to write.

You were quoted as saying the overall concept of the new album is about leaving your mark on the world – is this a concept you knew you wanted to explore going into the writing process or something that revealed itself when you got further into writing?

It kind of just happened. There are a lot of things different in my life when I started writing the record and one of the things that happened was I turned 30. When you are in your 20’s your sort of forever a teenager, nothing fazes you, whatever – punk-rock stunts your growth as it is. So there were a lot of ideas of how you’ll be remembered and those type of thoughts all came together to encompass a lot of different themes throughout the record.

“Is Survived By” was recorded with producer Brad Wood (Smashing Pumpkins, mewithoutYou) and you also recorded it in California – Do you feel like this directed the concept you wanted to take with the album because you were closer to home?

That was just luck of the draw. There were a couple people we really wanted to record with and he )Brad Wood) was at the top of the list. He expressed interest in doing it and it was a nice sigh of relief because our last record we did in Kansas. We drove out there and did it because we really like Ed Rose and it was the studio where Get-Up Kids recorded in and stuff. So for this record, we had a little more time to work on it and we aren’t being rushed – also Brad Wood like 2 miles from my house so I could go home every single night and wake up refreshed. It all just fell into place really well.

You have the tour with AFI and then with Self Defense Punchers for rest of 2013 – You guys are known for your intense touring schedules. Does it ever seem daunting to constantly be on the road?

You know it has become such normal life that I don’t think we are phased by it. This year we’ve been home pretty much all year so now that we are back out again, its like re-learning how to ride a bike almost. I don’t know if the other guys would agree with me but its been a little bit harder to get used to because we’ve only been out for two weeks and we’ve had a streak of bad luck so far. We got our van broken into in Detroit, which had never happened to us before. It was a hard start to the tour but we are getting ourselves back in the swing of things. After Riot Fest Chicago, we got back in the swing of things. The first couple days of any tour are always a little tough. Like on the tour with AFI this fall, its going to be tough as a support band because you are feeling out the crowd and you are playing to the headliner’s audience. You very rarely end up playing to anyone that actually knows your band, especially since a lot of those shows sold out in minutes, so a lot of TA fans probably didn’t make it in. So yea, its just about kicking off the cobwebs and getting used to an audience who may not know your music at all.

Pick up a copy of “Is Survived By” today. Touche Amore will be on tour with AFI later this fall. Dates and ticket information can be located at the band’s facebook page.