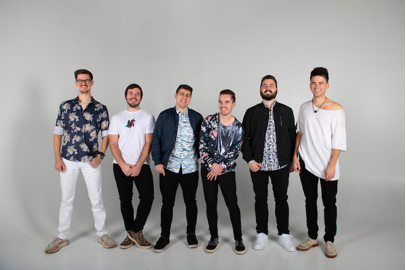 Washington D.C sextet Sub-Radio (Adam Bradley, Matt Prodanovich, Michael Pereira, Barry Siford, Kyle Cochran, and John Fengya) is our new “favorite sexually ambiguous indie-pop band”.   They’ve been together for over a decade and a few EPs later found their joyful, groovy, catchy sound. They’ve resonated with a growing fan base, are friends with Smallpools, and collaborated with successful producers who have worked with Halsey, COIN, Shawn Mendes, Post Malone, and more.  Sub-Radio embraces different styles and textures with their music which makes them infectious to listen to.  Unfortunately, their upcoming tour with the release of their new EP ‘Thoughts Lights Colors Sounds’ has been put to a halt due to the global pandemic, but the guys are ready to connect with their online fans by releasing quarantine videos every Wednesday on their socials.  B-Sides spoke with Sub-Radio about what’s new in their quarantine life and their musical direction.

B-Sides: Hey guys, thanks for taking time to chat.  So, what are your go-to quarantine kitchen snacks?

Barry: Flaming Hot Cheetos!
Adam: We have a quesadilla maker.
Michael: I’ve been having lots of fruit smoothies.

B-Sides: With the music venues shutting down and everyone stuck at home now, do you guys still have those steady jobs or is Sub-Radio your full-time gig?

Michael: We are all full-time musicians now.  No one in the band has a traditional 9-5 job.  A few of us are working part-time, but we’re fully committed to the band and that’s our number one focus.

B-Sides: How was that like making that transition to being full-time committed?

Matt: It took us a long time to get there.  It was two years back and forth deciding when should we do it.  It’s been really great for me because it gives me a lot to focus on music and making demos.

Adam: What’s really cool about the band is that we have skills associated with those jobs and it’s been super helpful.  We could do PR on our own.  We already know how to reach venues.  The guys are super hands-on and techy.  As an addition to music expertise, it’s nice to have six heads.

B-Sides: You guys have been performing together for a really long time and would’ve been on your ‘Disco Tour’ by now.  Were there any interesting things you had planned for the live shows?  In regards to the production and visual aspects?

Barry: We’re always working on choreography.  We wanted to make sure that this tour was different than the last because if anyone comes back we want them to experience something new.  We’re even thinking about a wacky inflatable tube man.

Michael: Kyle is our tech wiz.  He’s programmed lights for us that are synchronized to backing tracks that we play along with.  It’s a very much visual experience.

B-Sides: How have your performances evolved?

Adam: Very significantly.  It’s funny watching videos of us during the high school/college days.  We were just goofing around.  We had a different band name and lineup then.  We played a couple of shows a month at local festivals.  I had so much nervous energy and I didn’t know what to do with it.  There was a lot of notion for no reason and I’m jumping around like an insane person.  What I like about our shows the last couple of years, we really refined the movement on stage.  We have moments in the songs where we have little bits of choreo, because we’re not dancers.  We also learned how to dress ourselves so that’s a big step!

B-Sides: Your new single “Cool” is a special song about struggling with identity and the LGBTQ kids. What’s the emotional connection behind it?

Adam: We came up with the instrumental first.  It felt serious to me in the way we came up with the chords and we structured the song.  We’ve noticed that our crowds and those who follow us on social media tend to be young queers.  We like interacting with those kinds of people and bringing them into our little circle.  A couple of us identify as queer.  I grew up with kids like that in high school and college too that I’m still friends on Facebook.  The hook of the song is that I hope you grow up realizing that you’re valid and everything will be ok. It’s a fun song to play and it feels good.

B-Sides: On your Instagram Live, Adam was talking to Mike Kamerman of Smallpools about the song and said it sounded like The 1975.  Are they one of the bands you look up to?

B-Sides: Your upcoming EP ‘Thoughts Lights Colors Sounds’ will be out this August.  What can we expect from this new EP?

Michael: It has five songs.  Our next release is “Clark Kent” and we’re super excited about that.  The other two are a surprise. Overall, it’s a fun positive EP. It’s very dynamic.  It has dancey high-energy songs like “Disco”.  Also, it means something– the lyrics tell stories.  They talk about real subjects. The music is intricate and complicated in certain ways, but very accessible across the entire EP.  We’re really stoked to put it out!

B-Sides: If you had a personalized Cameo video, who would you want and how much would you pay?

Matt: Yeah, he was one of them.  I would like a message from Fall Out Boy.

Adam: I would pay any amount of money for Phoebe Bridgers just talking about her breakfast or something.  I feel like Brendon Urie would make good ones too.

Barry: I would pay The Rock!

B-Sides: Disney is planning to do a live-action of Hercules.  Who would you cast in Hercules?

Adam: I think Kyle could make a good Hades.

Kyle: Danny Devito needs to reprise his role as Phil!

Michael: I think The Rock should be everybody!