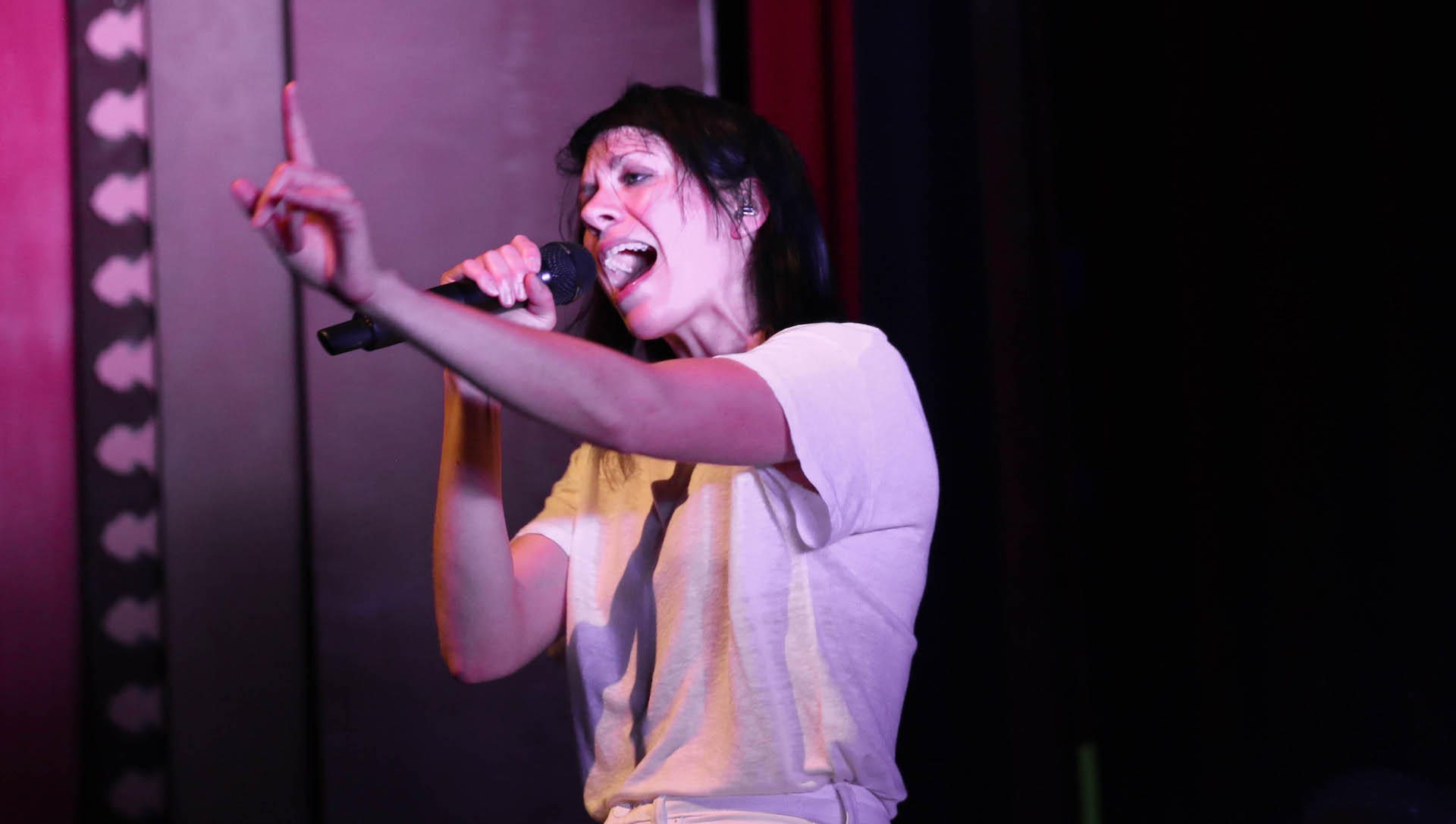 Saturday evening at the Fox Theater in Oakland was making plenty of noise with artists like and K.Flay that same night. Chicago/L. A based artist Dexter Tortoriello AKA Houses made everyone feel at home with his lo-fi music and sharing his appreciation for headliner/ 2x Grammy-nominee K.Flay. He delighted the crowd with songs from his EP Drugstore Heaven and even introduced a new track. Houses mentioned that this was his second night of the Solutions Tour with K.Flay and that they’re feeling fresh on stage. He wrapped it up with his commercial and autobiographical hit “Fast Talk” just before K.Flay’s set.

On stage, they got ready a white staircase with white wall projectors behind. In anxious anticipation, the audience chanted “K.Flay, K.Flay!” in hopes she’ll appear sooner.  Soon enough, the lights & intermission music faded when K.Flay stepped on stage with her musicians all wearing white. She kicked off the night ironically singing “Not In California” at the top of the stage whipping her hair at her own rock show. K.Flay did a lot of movement on stage from dancing, jumping, and even laying down. She made it clear that this was her stage for the time being. The white staircases and walls changed different background colors every time she sang a new song. A roadie ran to give K.Flay her guitar for her next song “This Baby Don’t Cry” off her third album Solutions, which was co-written by Dan Reynolds of Imagine Dragons. She was shredding the guitar alongside her bassist. By the end of the song, she took a quick break to speak to her fans. “Bay Area thanks for being here and showing up! We’re here to get away from all the bullsh** in the world and our jobs. We’re here to escape and listen to music!” From there she jumped into the next songs “Black Wave” and “Giver” off her sophomore album Every Where Is Somewhere. As she sang, K.Flay did this backstroke of a Matrix-style movement that just enhanced her performance.  She mashed up “Giver” with her other song “Make Me Fade” from her debut Life as a Dog. Each of her records distinctly evolves with their sound from raw, hardcore, and upbeat.

What really stands out with K.Flay’s performance is that she creates this rap preaching-style of singing. Each song has a strong personal message that she wants to share with everybody. It’s the realism in her lyrics that seem to hit everybody in a different way. It makes sense why her fans were shouting “K.Flay you slay!” Several of her songs were heavy with pulsating vibrations that surely people in the balcony must’ve felt. Throughout the show, the audience had their arms waving in the air especially when they were reciting her lyrics “I feel it, I want it, I need it, I love it”.  As is her signature, K.Flay was rapidly spitting out lyrics almost without a breath in her tongue twister song.  She reminded everyone how incredible they are as she introduced her next song “I Like Myself“, which is about finding compassion within yourself. When her song ended, her album theme color of confetti exploded– falling down as if it were snow.  K.Flay slowed it down with her band for some love ballad songs “Nervous” and a cover of Liz Phair’s “F**k & Run”.   It was at a Liz Phair show in the Bay Area where K.Flay met her then musician girlfriend Miya Folick.  She picked up the tempo with another song from Solutions, “Ice Cream” that bled vocal distortion and “Sister“.  K.Flay came back for an encore with her mega-hit from her second album “Blood In The Cut” where the crowd went wild when she sang “cried on the streets in San Francisco”.  Then to cap off the energetic set, confetti dropped as part of her grand finale of the show.  K.Flay has come a long way from supporting Imagine Dragons, 30 Seconds To Mars, playing festivals and small venues to now headlining her own shows and her show in Oakland showed why she belongs on the big stage for years to come.